Home / Blog / Consequences of a DUI for College Students 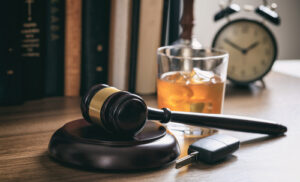 Driving under the influence is illegal in all U.S. states, including New Jersey. If you’re charged and convicted of a DUI or DWI, you can expect certain consequences that may include a suspended driver’s license, legal fines, and in some cases, even jail time. There are also secondary consequences that many may forget, including how a DUI may affect your college enrollment or options.

What are New Jersey’s Laws for DUIs?

A DUI includes a BAC of 0.08% or higher when driving a vehicle. However, it’s important to keep in mind that college students who are under 21 years of age may receive charges even if their BAC is under that. In fact, an underaged student may be arrested and charged even if their BAC is at, or under, 0.01%.

A DUI in New Jersey may lead to the following potential consequences:

The state may also impose other consequences, like a required Ignition Interlock device or legal fines. These charges are separate from what the school may impose. Schools typically have their own policies when it comes to DUIs and underage drinking. Many schools have a zero-tolerance policy for underage drinking, which may be included with DUI charges. A DUI charge could also lead to a loss of scholarship or funding.

If you’re a college student and are charged with a DUI, it may also include other charges. Other common charges include:

Pairing these charges with a DUI can lead to even worse consequences. The court will also consider if the offender has any prior offenses, as the school will also likely do.

How To Handle a DUI If You’re a College Student

If you’re charged with a DUI or concurrent charge, it’s important to consider your options. Some schools may require that you notify them of any pending or convicted charges, especially if you have an active scholarship. You may also be required to notify them of charges that happen while on campus.

If the college doesn’t initially find out about it, they may later. Additionally, if you decide to change colleges or pursue higher education, you may be asked about your criminal record during an interview. Many internship or residency positions may also complete a background check, which may uncover your DUI charges. These charges could even prevent you from receiving an offer.

Protect Your Future By Working With a DUI Lawyer

With so much to navigate and figure out, it’s not always easy to know the best way to proceed following a DUI charge. If you’re a college student and you’re dealing with pending DUI charges, it’s important to discuss your options with a lawyer as soon as possible. In addition to the potential jail time, the charges could also affect your future, including your college enrollment or career possibilities.

Have you been charged with a DWI or DUI offense in New Jersey? A drunk driving conviction could leave you with a permanent record, and it could result in your driver’s license being suspended for a very long time. That is why it is imperative that you speak with a qualified DWI defense lawyer about your case. The lawyers at Attorneys Hartman, Chartered represent clients charged with drunk driving, breath test refusal, and related offenses in Burlington County, Camden County, Marlton County, Mount Laurel, and throughout New Jersey. Call 856-393-6073 or fill out our confidential online form to schedule a free consultation about your case. We have an office located at 68 E. Main Street Moorestown, NJ 08057.