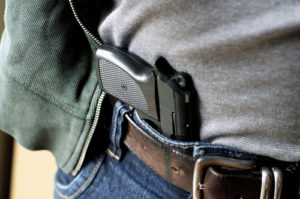 When a criminal offender commits a crime and a weapon is involved in the commission of the crime, the offender may be subjected to additional or enhanced penalties if he or she is convicted for the crime. Public policy calls for enhanced penalties when crimes involve weapons because of the increased risk of serious injury or death that the presence of weapons pose.

Different states’ laws can define a “deadly weapon” different. Some states have narrow definitions that only include objects commonly identified as weapons, such as guns or knives. However, some states use much broader definitions that include any object that can cause serious bodily injury or death. As a result, mundane everyday objections can be deemed deadly weapons when used to assault or batter someone, such as a baseball bat, hammer, or even a frying pan.

If a criminal offender is found to have used or possessed a weapon in connection with his or her charged crime, he or she may be subject to a sentencing enhancement. A sentencing enhancement could be something as simple as adding additional prison or probation time to the sentence the offender would already receive. Or sometimes an offender may receive one sentence for the underlying crime and then an additional sentence for having or using a weapon in connection with that underlying crime. For example, if an offender uses a handgun to rob someone on the street, the offender will likely receive a much harsher sentence that he or she would have received if they had no weapon during the robbery.

A court can apply a sentencing enhancement for a weapon in connection with the underlying offense even if the weapon is not actually used to injure or kill someone. It may simply be enough that a weapon is shown to a victim or that a victim is told by the criminal offender that the offender has a weapon. And for other offenses or enhancements, it is simply necessary that the offender possessed the weapon during the crime, regardless of whether the victims ever knew of its existence.

Purpose and Effect of Sentencing Enhancements

The purpose of sentencing enhancement is to deter the use of weapons during crimes. Having a weapon present during the commission of a crime, especially a violent crime, increases the risk to the health and safety of those present, including the offender herself or himself. Sentencing enhancements can result in a convicted offender being classified at a higher grade of criminal offender, which can have effects such as increasing or multiplying the length of a prison sentence or subjecting the offender to other collateral consequences of conviction.

Were you arrested or charged with weapons offenses in New Jersey? The consequences of a conviction could be severe, leaving you with a permanent criminal record and possibly even sending you to jail. That is why you need to speak with a qualified criminal defense attorney as soon as possible about your case. The attorneys at Attorneys Hartman, Chartered have successfully represented clients charged with weapons offenses in Burlington County, Camden County, Marlton, Medford, and throughout New Jersey. Call (856) 235-0220 or fill out the online contact form to schedule a consultation with a member of our legal team. We have an office conveniently located at 68 E. Main Street, Moorestown, NJ 08057.